“Derin, I don’t know what has come over your daughter. She’s just irritable, crying, touchy,… and she’s not eating! It seems she is acting a Nollywood love story for me here!” Imade reported over the phone.

“What could the matter be?” Derin asked.

“I think you need to come home. She’s most likely missing you more than usual.”

“Oh! My baby is missing me. Don’t worry, I’ll be home soon.” he said. “And, it seems to me that you’re also trying to tell me something.”

“Like you also miss me more than usual.” Derin teased.

Imade laughed hard, throwing her head back. “Me? Miss you? Is that even possible?”

Imade smiled. They were back to being lovebirds after they resolved their genotype and blood group conflict.

“She’s awake. I’ll go get her.” Imade said, and went to pacify her screaming child. Imaobong kept crying loudly even though Imade was carrying her.

“Something is wrong Derin. Her body feels unusually warm. Oh dear God, I pray it’s nothing serious because we just finished one drama of colds, catarrh, and malaria last week.” Imade said worriedly. “Sweetheart, will you try speaking to her? Maybe hearing your voice could calm her a bit.”

But Imaobong hit the phone away, crying and tugging at her ear. She most definitely wasn’t interested in a phone conversation.

“Oh dear. I hope she didn’t put anything in her ear.” Imade remarked. She was already freaking out.

“Calm down babe. You’re getting agitated. Even if there’s an object in her ear, you can pour in some palm oil.”

“Derin! You want me to pour palm oil in your child’s ear? For what now? I cannot believe this!”

Derin burst into laughter. “Relax Imade. I was only pulling your legs. Just give her paracetamol.”

“Please, I’m not in the mood for jokes! Let me sort her out and call you later.”

Over the next twenty-four hours, Imaobong was crying, having fever spikes, and using paracetamol six-hourly. Imade was hassled, worried, and sleep-deprived. Yet, there was little to no improvement. So, Imade took her to the hospital.

“A-what?” she asked. Imade didn’t know whether to be afraid or not. She had no idea what that meant.

“Acute otitis media, which simply means an infection of the middle ear that’s lasted less than six weeks. This visible ear that we see is the outer ear. There’s a middle and a much deeper inner ear.”

Imade sighed. “What could have caused this doctor? She just got treated for colds and catarrh last week so…”

“That’s the culprit! You see, there’s a tube that normally drains fluid from the middle ear into the throat. If this tube gets blocked, the fluid becomes trapped in the middle ear and can get infected by viruses and bacteria. That is how middle ear infections are often born. And guess what? The cold and catarrh which Imaobong had last week can get that tube blocked!”

“Well, not necessarily. Most cases of acute otitis media tend to clear up on their own without antibiotics and can be easily cared for at home using pain relievers. Paracetamol and Ibuprofen are very useful for this. You could also give her a cool bath to help control the temperature.”

“So in other words, I shouldn’t be worried, right?” Imade asked cautiously.

“Exactly! Acute otitis media usually resolves in three days, to about a week under normal circumstances. But if fluid, pus, or blood begin to come out of the ear, then you need to bring her back immediately. That means it has become severe and would require proper hospital care so that it doesn’t lead to hearing loss. Also, if the fever is very high despite all the medications, she needs to come back.”

“One more question. Is it safe to pour palm oil in her ear?”

“Trust me, you don’t want to do that. It is absolutely unnecessary!”

Imaobong who had fallen asleep during the consultation stated stirring. “I think we better be on our way back home. Thanks so much for taking your time to explain doc. At least I will no longer be afraid of acute otitis media.”

“You’re welcome, Mrs. D! My regards to your husband.”

Let’s dive into the ear

Take a lucky guess or show off your knowledge! 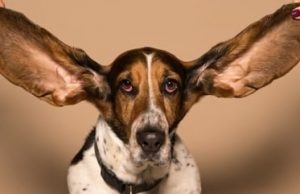 We are sorry that this post was not useful for you!

12 thoughts on “The irritable toddler with a middle ear infection”